Toni Morrison, A Friend of Mind

In August 2019, the world lost one of the greatest authors of the century.  In any review of great  American fiction, we cannot ignore the contributions of Toni Morrison who changed the landscape of literature.  I first discovered Morrison as I perused the shelves for really good books to keep me company as I went on maternity leave. I had four sons between 1977 and 1984 and I carried a Morrison novel to the hospital every time. I savored them for family trips on the Greyhound bus as well as chaperoning my students around the state. Years later, when I decided to enroll in a master’s program at the University of Dallas, Morrison’s Beloved was the final item on the syllabus as well as the subject of my first graduate paper. Toni and I have been hanging around together for a long time.

Here are my top five Toni Morrison novels, presented in chronological order. I couldn’t possible choose a favorite; it just depends on the mood I’m in. As my grad adviser used to say, I “revisit the text” often, gleaning something new every time.

From the first book on, I admired the single parent who worked full time as an editor while turning out novels at night. The Bluest Eye was published in 1970. This coming-of-age novel traces the story of three Black girls growing up in post-Depression Ohio through the voice of Claudia McTeer, a spunky fifth-grader with no tolerance for white people. She observes and courageously responds to the challenges of racism, poverty, and love, while her friend Pecola suffers from neglect, and physical and sexual abuse, ultimately losing herself in a premature pregnancy and psychosis. Inspired by the preference of so many little Black girls for white dolls with blue eyes, Morrison chose to tackle the low self-esteem and desire for “the other” so common in our community. Her lyrical language and innovative plots offered a deep contrast to the popular male African American writers who generally focused on race and urban squalor.

After receiving many rejection letters, her book was optioned by a publisher. It did not sell well at first, but the criticism was glowing. John Leonard, in the N.Y. Times, described her writing as “a prose so precise, so faithful to speech and so charged with pain and wonder that the novel becomes poetry.” Toni was on her way. Though the story is about young characters, it is definitely not a children’s book; it has lessons for all.

Her second novel, Sula, was published in 1973. It’s about two girls, Sula and Nel, who are close friends that share a terrible secret. After years of separation, Sula returns and must fight to defend her unconventional lifestyle and beliefs. Nel is happily married and accommodating, but still drawn to the lifelong bond they had, even if it would destroy her. The women become two sides of a kindred spirit, “two halves of one person,” according to Morrison, who was impacted by the Women’s Liberation Movement as well as the focus on sisterhood in the Black Power Movement. This is an excellent read, especially for women who’ve encountered difficult friendships laced with love. 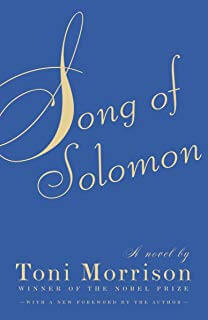 Morrison’s third book, Song of Solomon, is one of my all-time favorites. This 1977 novel touches on the pre-Civil War myth that slaves could will themselves to freedom and fly away. The author touches more on the male point of view with this book in the character of Milkman Dead, the only son of a dysfunctional middle-class family. He is alienated from his parents (despite his mother’s attempt to smother him and his father’s attempt to pull him away), as well as his sisters and estranged poor relatives. Throughout the novel, he is searching for love, for riches, and for himself. This book is filled with historical allusions, yet it has the urgency of a fast-paced mystery. Even the ending is esoteric, leaving room for debate in a classroom setting. This is a powerful book for readers of any gender and age. 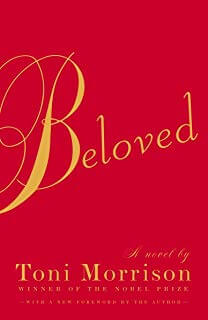 Beloved is another of my favorites, and it earned Toni Morrison the Pulitzer Prize in 1987. It was inspired by an 1856 article about a runaway slave who killed her children rather than have them taken back by slave catchers. The story haunted Morrison for years as she wondered what would make a mother do such a thing. She developed the character of Sethe and showed not only some of the unspoken horrors of slavery, but the unforeseen depths to which love will make you go. Unlike any of her other novels, Beloved has elements of fantasy and horror as the ghost of the murdered baby grows up haunting the house and takes form as an adult in the flesh, returning to reclaim the mother she had lost in death. Beloved is a difficult read, but well worth the effort it takes to follow the frequent changes in time and point of view.

Finally, my last favorite is Jazz (1992), a wonderful novel about a romantic triangle set in Harlem in the 1920’s, the Jazz Age. Inspired by a James Van Der Zee photo in the Harlem Book of the Dead, the body of a murdered teen lay in a casket surrounded by flowers. When asked who did it, she had replied, “I’ll tell you tomorrow,” protecting the jealous boyfriend who shot her at a party. Such photos were common then, and it prompted Morrison to write her own version of the story about an older man with a neurotic wife who has an affair with a teenager. When she rejects him, he kills her in a moment of passion, and the angry wife goes to the wake and attempts to mutilate her body. The characters in the story know nothing about the materialism and indulgence that characterized the Jazz Age, or what would follow the new musical styles. Instead, they are everyday people who move by improvisation, reacting spontaneously to whatever life brings their way, like jazz. The story is filled with pathos. There are also the typical Morrison flashbacks to slavery days that explain the connections between the characters. Any fan of the Harlem Renaissance would appreciate this book. So would any romance lover. 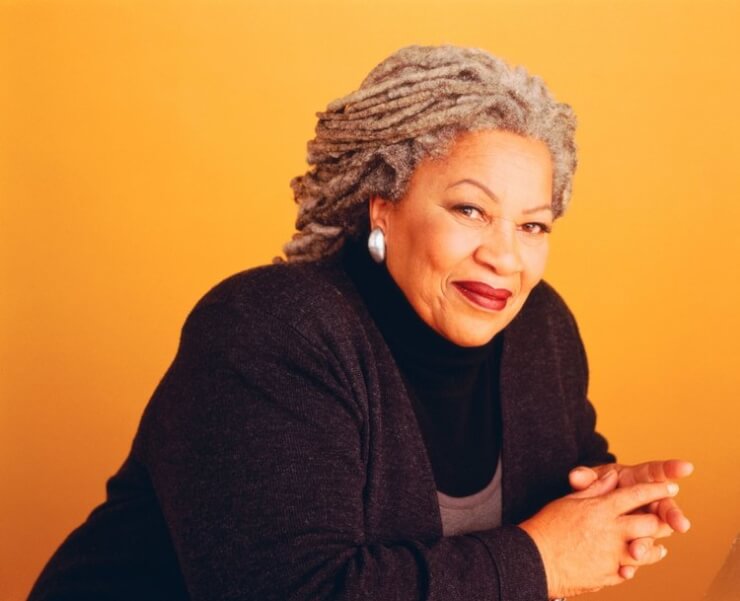 In 1993, Toni Morrison was awarded the Nobel Prize in Literature for her collective work, including Tar Baby written in 1981. She was the eighth woman and the first Black woman ever to receive this award. Since then, she has written five more novels: Paradise (1997); Love (2003); A Mercy (2008); Home (2012); and God Help the Child (2015). This brings her novels to a total of eleven, all books about love, she claims. She wrote several children’s books. And she has also written two plays, Dreaming Emmett and Margaret Garner, a libretto, as well as compilations of speeches and essays: Playing in the Dark, The Origin of Others, and The Source of Self-Regard, published just six months before she died in August, 2019. Her award-winning documentary on race and the human condition, The Pieces that I Am, premiered in June of that year. In addition, she edited and contributed to several anthologies.

A play version of The Bluest Eye, developed by a teacher, toured in 2006, and Beloved was made into a movie in 1998. It was not received well by critics or the general public. Since then, Morrison has expressed little interest in filming any more of her works; she believes in the profound experience of reading a good book. I hope you do, too. Check them out. 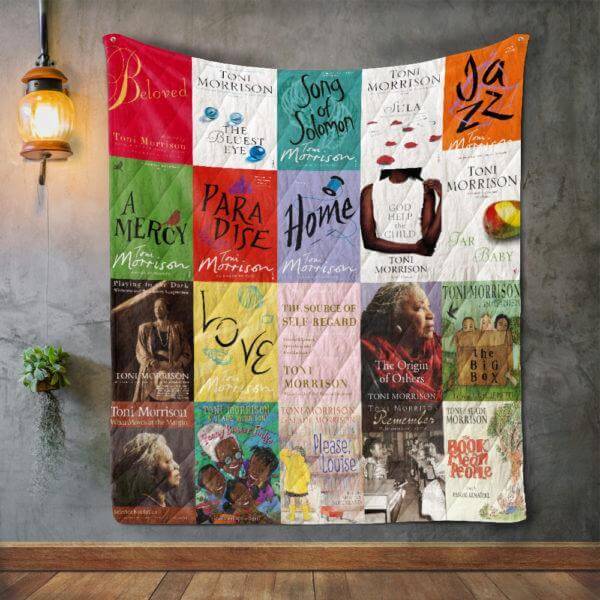 Toni Morrison had an unmatched power of language. When I saw this quilt made of the covers of all of her books, I had to have it. Her words continue to inspire me. I'm sharing a few of my favorites with you.

If there is a book that you want to read, but it hasn’t been written yet, you must write it.

You are your best thing. (Beloved)

You wanna fly, you got to give up the shit that weighs you down. . .

If you surrendered to the air, you could ride it. (Song of Solomon)

And my personal favorite, because that’s what Toni Morrison does for me:

She is a friend of mind. She gather me, man. The pieces I am, she gather them and give them back to me in all the right order.

If you have not had the pleasure or the challenge of reading a book by Toni Morrison, pick one up today.

And my personal favorite, because that's what Toni Morrison does for me: 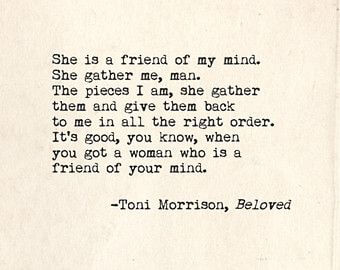 If you have not had the pleasure or the challenge of reading a book by Toni Morrison, pick on up today. But I have to warn you, she will make you work to get through it. But you'll be glad you did.